Another thrilling West London derby was held between Fulham and QPR on Saturday, March 17, at Craven Cottage. The game ended in a 2 – 2 draw, as the Cottagers let slip a two-goal lead.

The result came as a surprise, since betting odds were strongly favouring Fulham, but that is what makes betting on sports so exciting! You don’t have to spend hours searching for the best odds on the internet, just check out the BonusExpert website and discover the Unibet Sports Welcome Bonus.

Chasing Premier League promotion continues for Fulham, and with this game, they missed the opportunity to narrow the gap on second-placed Cardiff to five points. 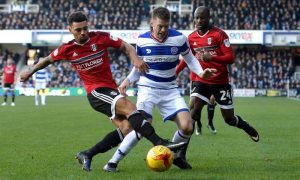 The first goal came on 32 minutes into the game when Tom Cairney placed a precise shot in the bottom corner from 20 yards. Minutes later, Lucas Piazon, assisted by Sessegnon, doubled the lead with a neat move to put Fulham in full control of the game.

However, it was Massimo Luongo who pulled one back for the Rangers right before half-time, hooking the ball past Bettinelli from Matt Smith’s header.

After the break, Fulham made some careless mistakes, allowing Rangers to dominate the game. Pawel Wszolek levelled on 81 minutes, with a composed finish after Denis Odoi was caught in possession, allowing the winger to run clear on goal.

Although Fulham didn’t win three points in the derby this weekend, the game was still a historical achievement: they set a new record of 16 unbeaten games in a streak, beating the 15-game record set in the 90s under Kevin Keegan.

Despite beating the record, this result was a setback for Fulham in their pursuit of the promotion to Premier League, and manager Slavisa Jokanovic was not satisfied:

“I am not here to fight for records, I am here to win the games. We didn’t win. I cannot be satisfied. It’s [the record] not important to me.

“We managed to score two goals, we had it under control, but the first goal they scored caused important damage.

“After one unforced mistake, they scored the second goal. They deserved that goal because they made a few important entrances and had some chances, half chances.

Although his team put up a strong fight, QPR boss Ian Holloway was also not completely content:

“As the game went on, I’m disappointed we didn’t end with three points. I’m delighted with the character.

“I needed half-time to have a rant and say ‘wait a minute, get a bit closer to people’. I was fuming.

“I told them to get after people and luckily for me my subs helped. We got about them and we deserved what we got.

“I believe in my team and we what we are doing. Do I expect young lads to be consistent? Not really. But I will teach them.” (source: BBC)

Fulham is currently third on the Championship list with 69 points, behind Wolverhampton Wanderers with 82 points and Cardiff City with 76 points. QPR is fifteenth with 47 points.